All Collections
Apps, Integrations & Web Connectors
Zapier
How to Use Zapier: The "Proposal State Changed" Trigger

How to Use Zapier: The "Proposal State Changed" Trigger

Written by Tom Maxwell
Updated over a week ago

If you are new to Zapier, please read our introductory help article before reading on below.

Please note, the Proposal State Changed trigger is currently not supported on our New Proposal Editor.

In this article we will introduce the Proposal State Changed Zapier Trigger, including the following sections:

New as of May, 2019, the Proposal State Changed Zapier Trigger allows you to create powerful workflows anytime a proposal in your Practice Ignition account changes from one status to another.

Compared with the existing triggers (Proposal Accepted & Service Accepted By Client) - which rely on a proposal becoming active - this new trigger will run when any proposal status change occurs. For example:

and so on. As such, there are countless possibilities for creating powerful automations between PI and the 1500+ apps that connect via Zapier. Read on for best practices on using this Trigger in your workflows, and some real-world examples that you can implement immediately.

What are the different status changes available?

It's important to know the combination of status changes available to you before you start planning your zaps. Here is a comprehensive breakdown of each status, and what they can change to:

A brand new proposal can only move from no status to draft.

A draft proposal can move to five different states in Practice Ignition. This opens up a huge variety of workflow opportunities that you can automate with the Proposal State Changed trigger. 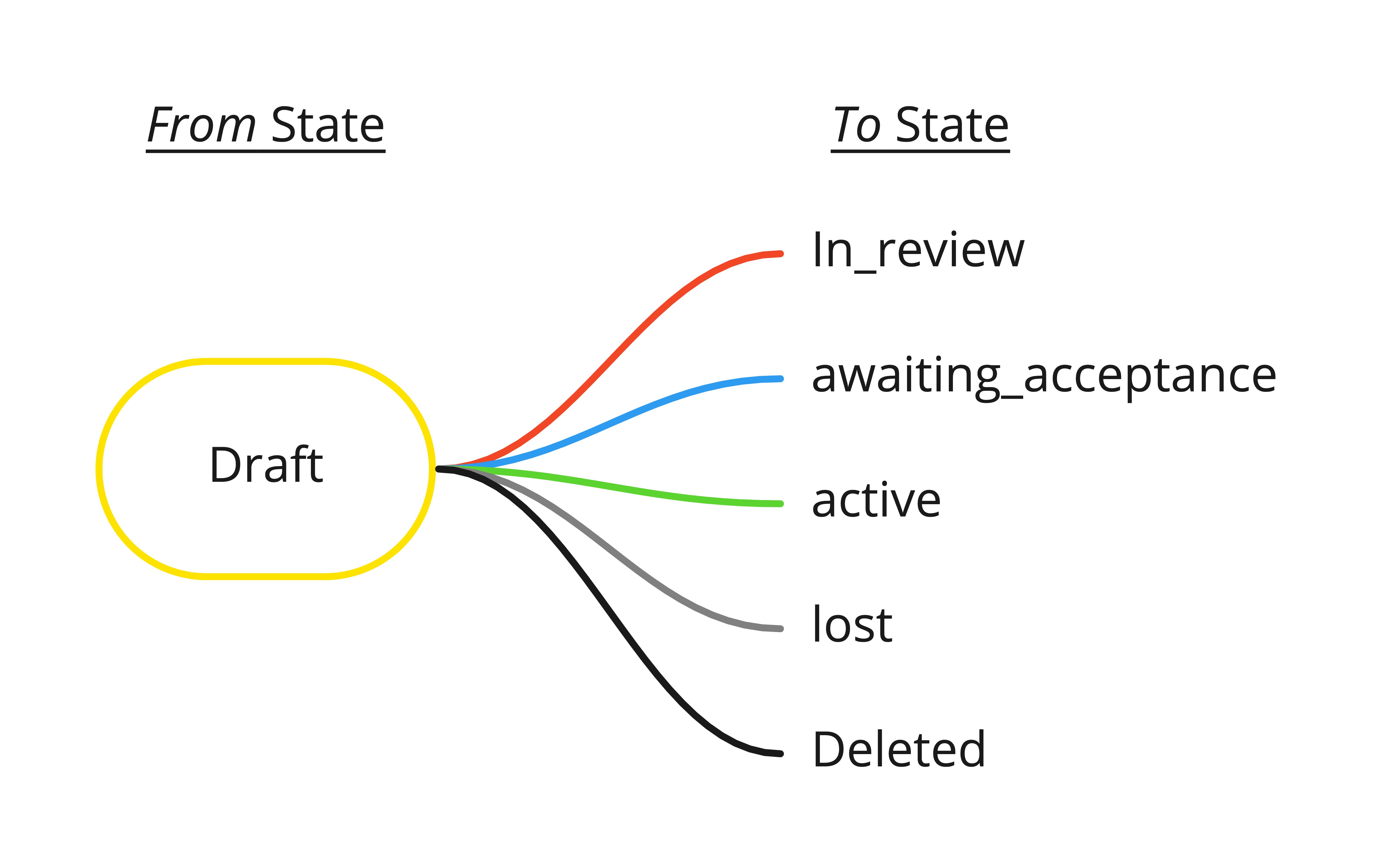 Just like the Draft status, In Review also can move to 5 different states, including moving back to Draft 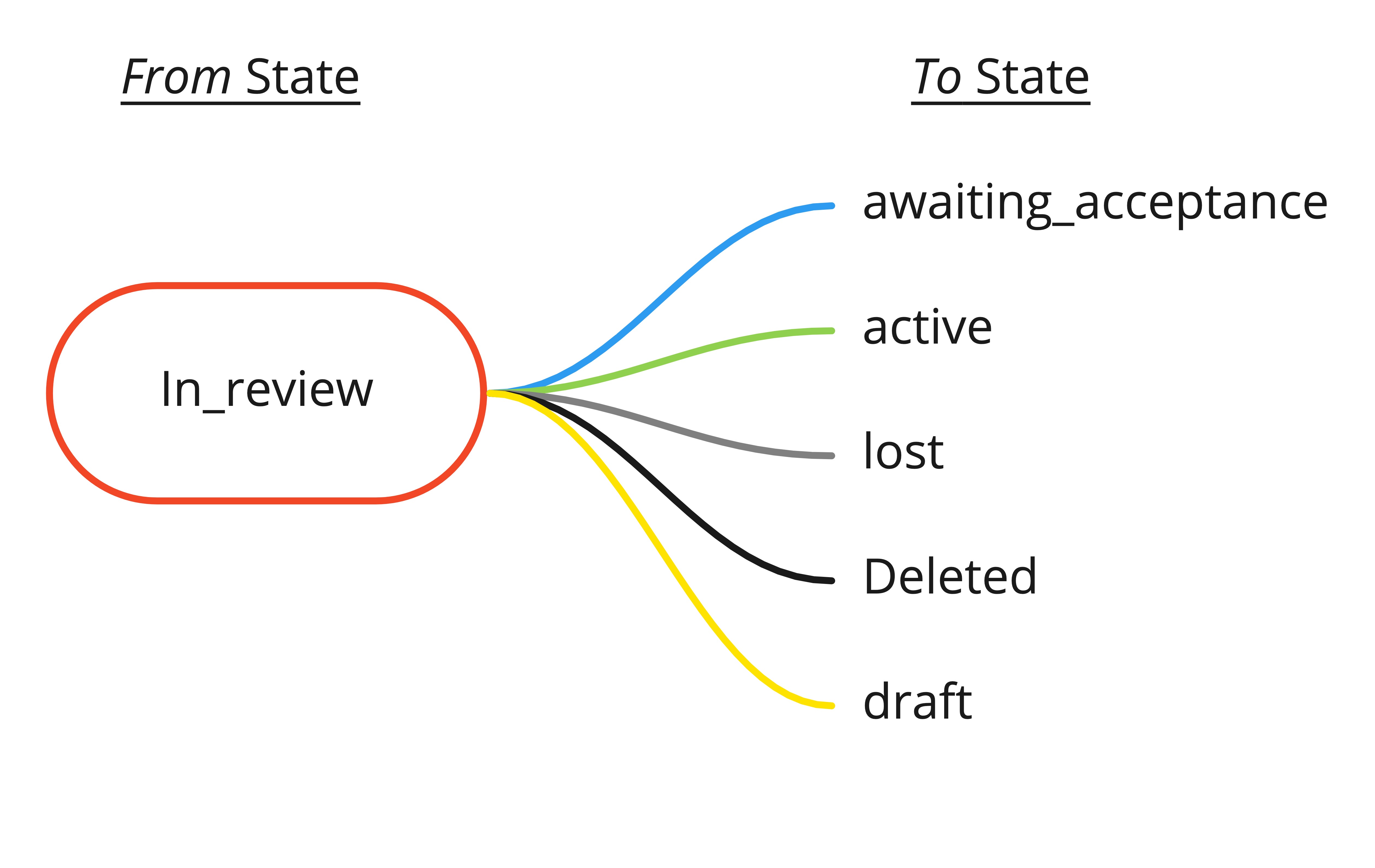 Once a proposal is in awaiting acceptance, it can move to 4 different states in PI. This includes the Revoke action, which would move a sent proposal back to Draft.

PI Pro-tip: If you want to trigger workflows when a proposal moves to Active, the other available triggers are better options for you (proposal accepted, service accepted by client). 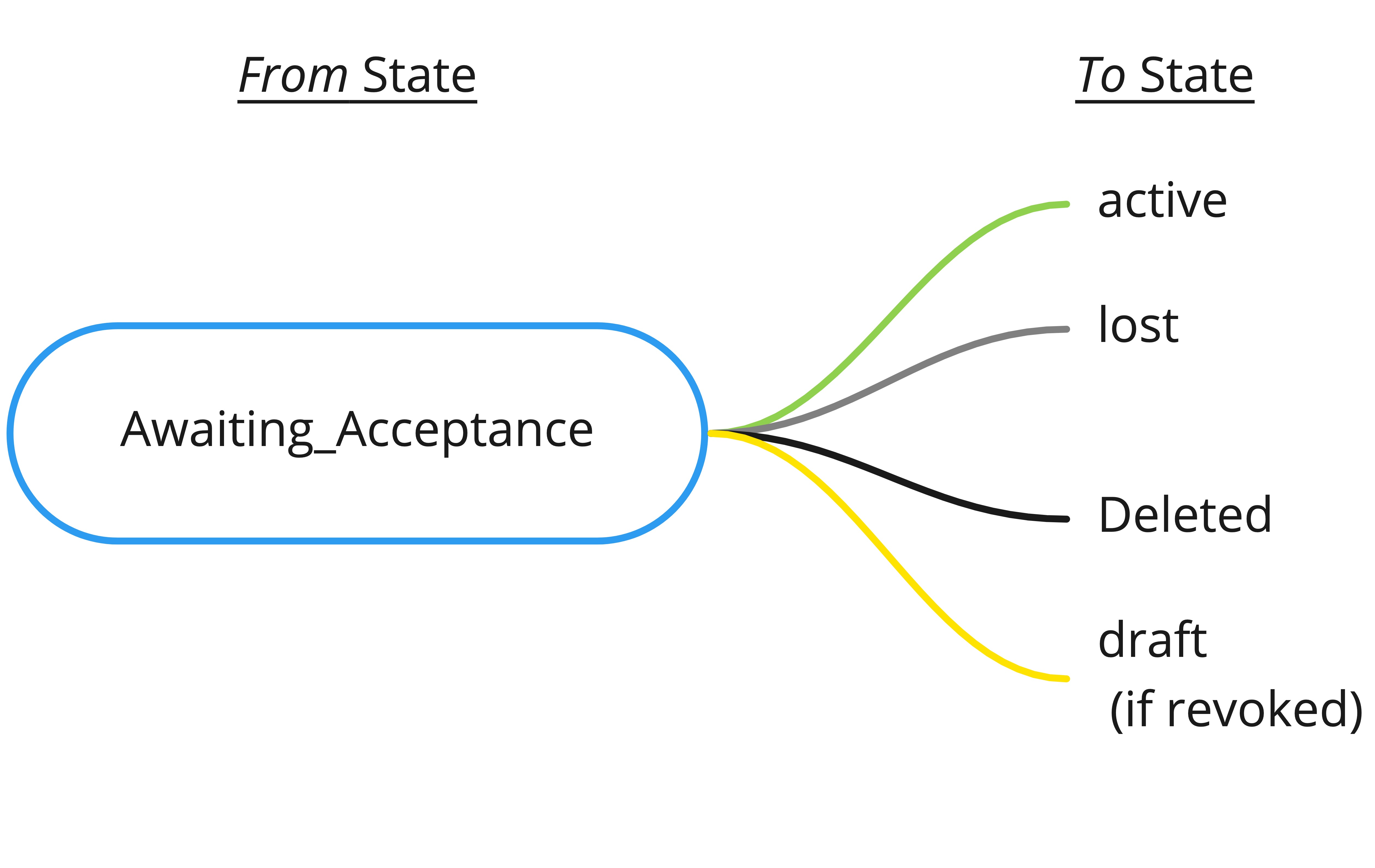 Active can only move to completed, though you can set up some very powerful workflows with this one status change. 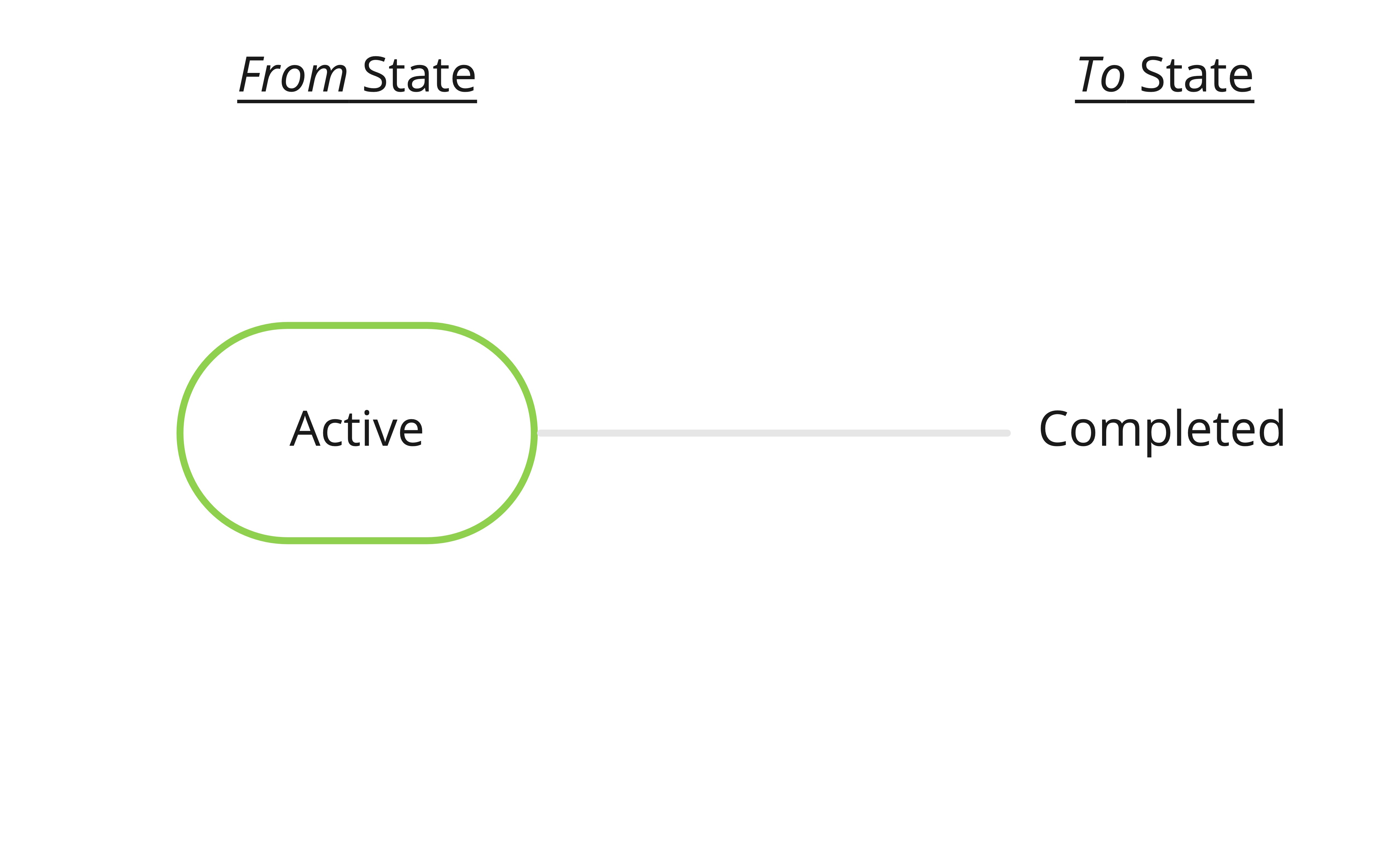 A completed proposal can only become deleted, or conversely it can be made active again. 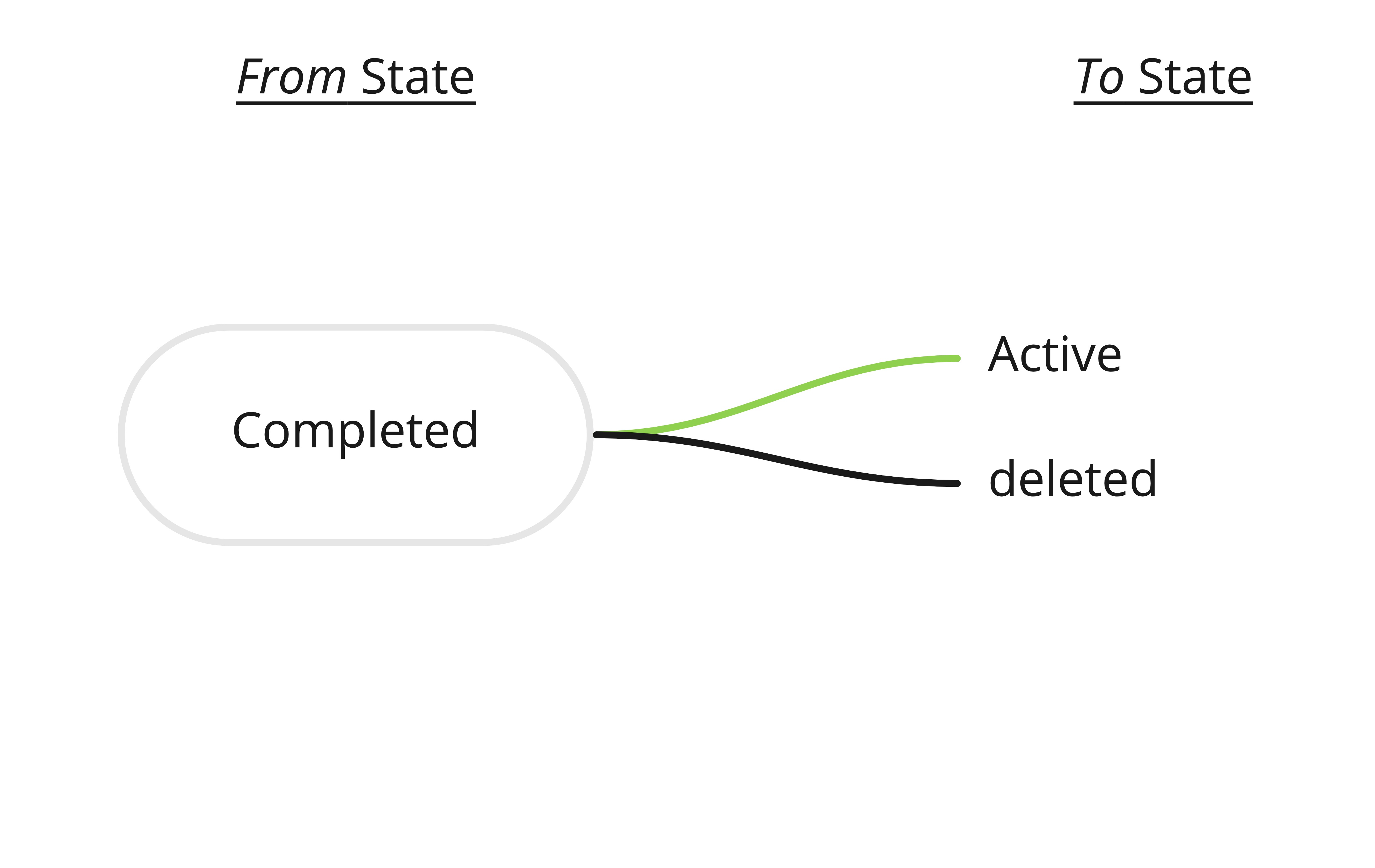 A lost proposal can be moved back to draft, or deleted 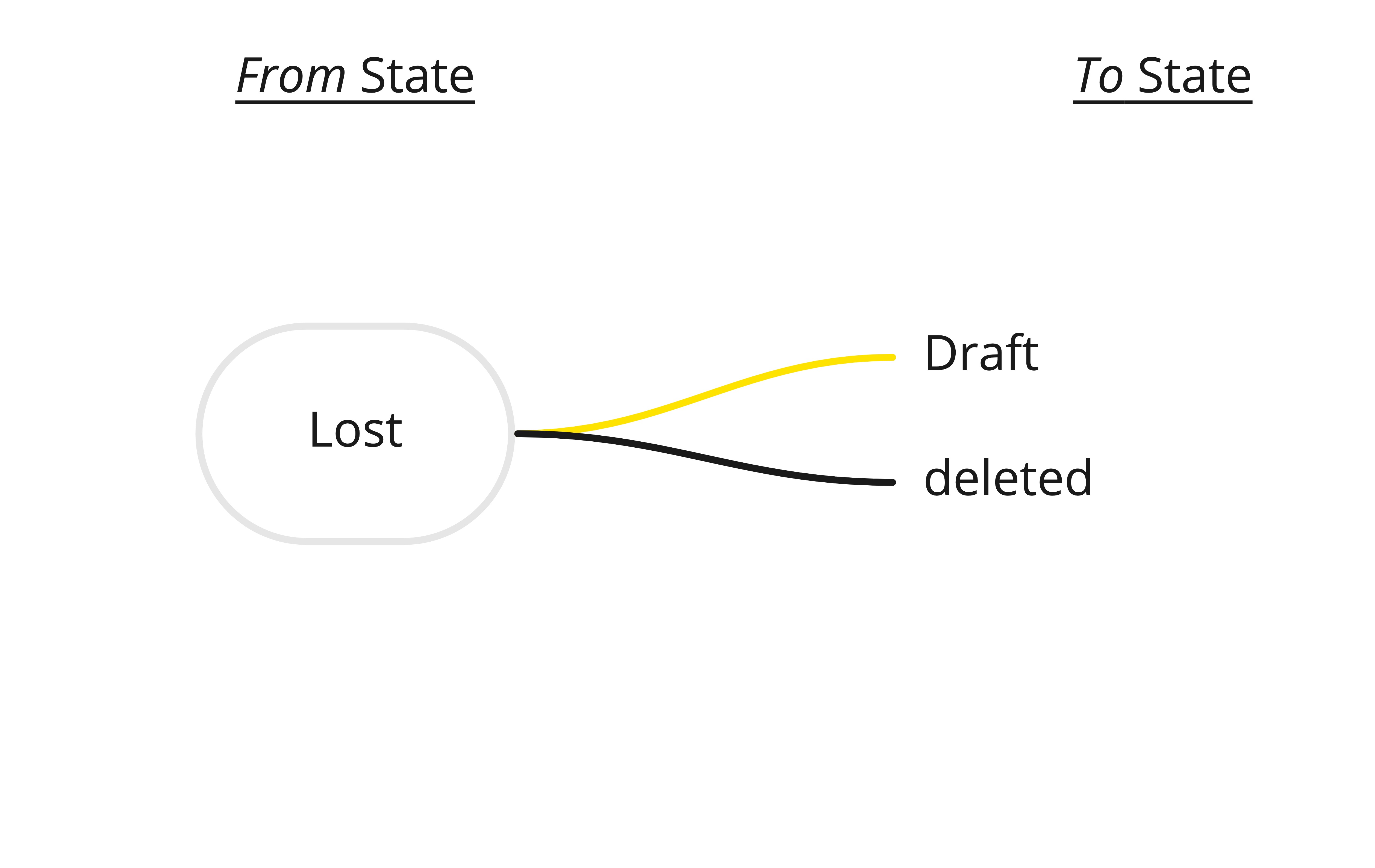 Now that you know what status changes are available to you, you can start building out your zaps! Next, lets dive into why filtering your zaps will be critical.

Best Practices for using this trigger: Including a Filter step in your Zap.

Without filters, the Proposal State Changed Zap will run for every single proposal status change that occurs in your PI account. Without filters, your zaps will quickly become counter-productive.

As an example, If you want to automatically send a "request for review" email to a manager so they can double check a proposal before it is sent to the client, you want to ensure that your Zap will run only when the proposal moves from Draft to In Review.

If you fail to filter your zap, your manager will receive an "request for review" email for proposals that have been created, accepted, deleted or completed. The Filter By Zapier app will ensure this won't happen. Note: you will need a paid subscription to Zapier to enable multi-step Zaps.

Here's how it works:

3. Hit Save + Continue on the "Select Filter" screen
4. There will be 3 fields you need to populate to create your filter.
a. In the first field select the From field from the sample proposal you found in step 1
b. Select (Text) Exactly Matches in the second field.
c.  type in the from status you want this Zap to be based on. In our example above, the from status would be Draft.

5. Next, hit the +AND button below, as you'll want to create a 2nd condition, which will be the To status. From our example above, the To status would be In_review (note that you must include the underscore, as that is how the status will come through to Zapier. This also applies to the Awaiting_Acceptance status)

Once you've completed this and added your final action steps, your Zap will only continue if the proposal has moved From Draft To In_Review. If you want to create other zaps for different combinations of status changes, just follow the same instructions every time you add your filter, and simply change the from and to status.

The only exception is If you want to create a zap every time a new proposal is created in your PI account, when you set up the filter step, the From field will be blank. As such instead of selecting (text) exactly matches, you'd select Does not exist:

PI Pro-tip: If your sample proposal does not match your filter conditions, you'll see a message like this:

This does not mean that you have done it incorrectly. It simply means the sample proposal just did not meet the filter conditions. Keep building your zap!

Let's now look at two practical examples of Zaps that you can use to automate parts of your sales and onboarding process.

Example 1: Notify a Partner or Manager that a proposal is ready for Review

In this example, the person that drafted the proposal (preparer) wants their manager or partner (reviewer) to review the proposal, prior to sending the proposal to the client.

The manual way of doing this is by drafting the proposal, copying the link to the the proposal (whether the PDF link or the link directly to the proposal in the app) and sending it via email or an internal messaging tool such as Slack, (or tapping the Manager on the shoulder).

While not an overwhelming task, it's still tedious and creates a bottleneck in the workflow. With the Proposal State Changed trigger, the reviewer is notified immediately when the proposal moves from Draft to In Review. 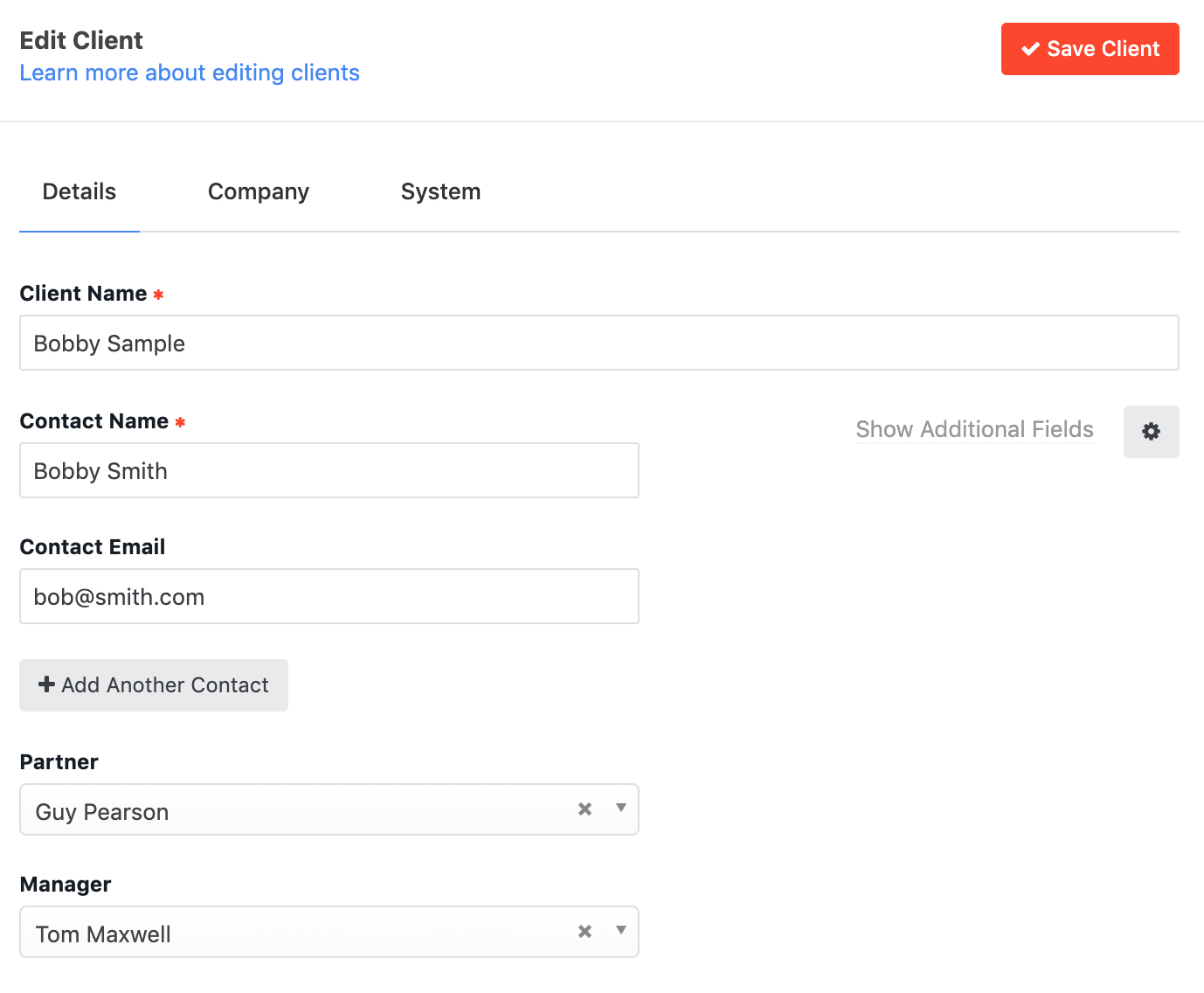 3. Action 2 - Your notification tool (email, gmail, outlook, slack). In this example let's use the built in Email by Zapier app to send an email automatically:
a. Select email by Zapier from the built-in apps section (or search for it) and then select "send outbound email"

b. Next, you'll populate the email template with the data from Practice Ignition, plus whatever text you'd like to include.

We recommend the following as a minimum (note: the to field can be the Client Partner Email or Client Manager Email, depending on who you would like to send it to): 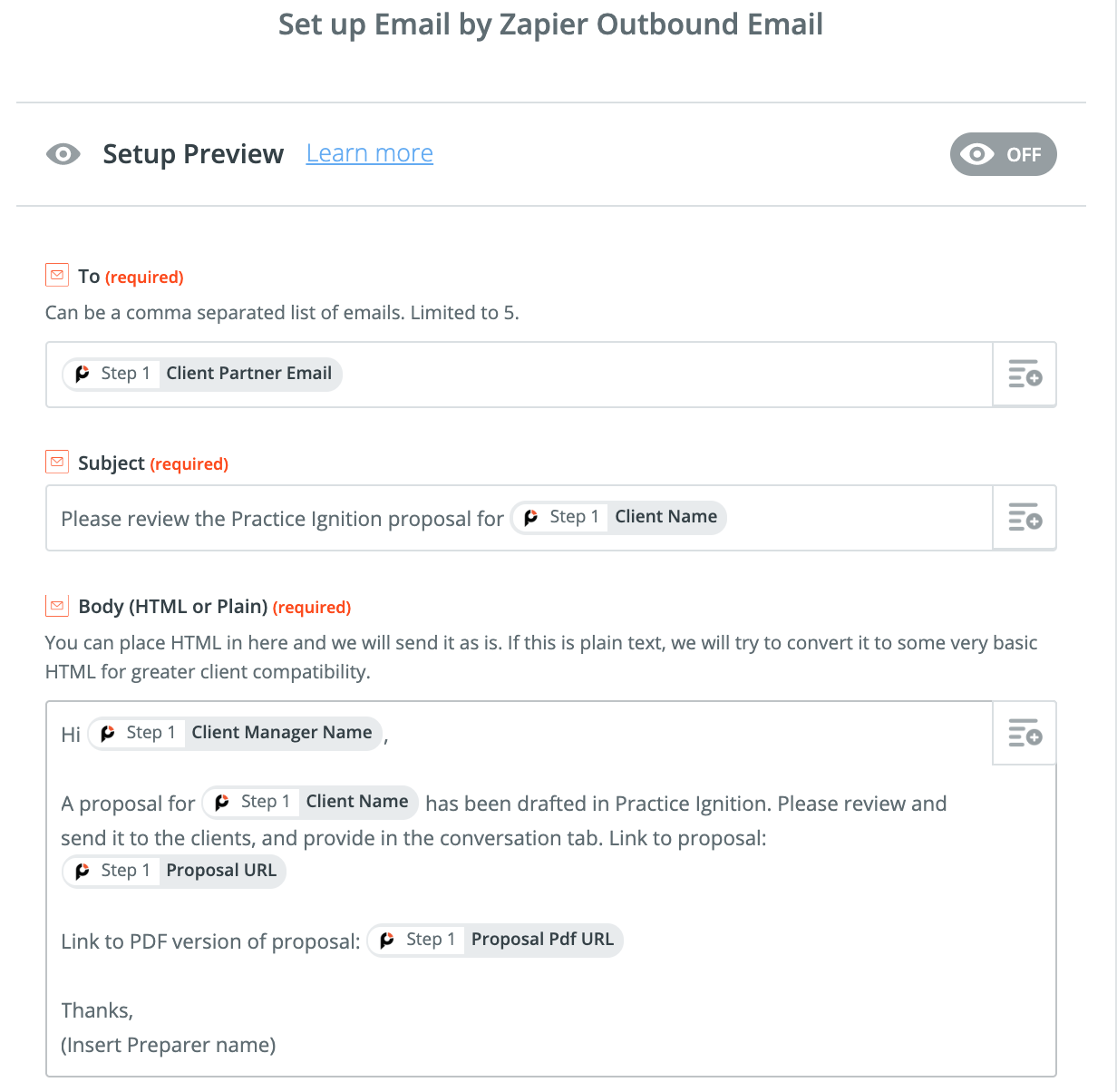 The data will take care of automating who the email will go to, and which proposal it links to:

Once you enable the zap, all proposals moving from Draft to In Review will automatically notify the appropriate Partner or Manager.

Example 2: Update a "deal" in a CRM when the proposal state changes.

Practices using a CRM alongside PI to manage their sales "deals" and prospect communications can benefit from the proposal state changed Zapier trigger, to make the combination even more powerful.

Here are just some examples of CRM updates:

In this example, we will send the proposal, which will immediately update the deal to the "proposal sent" stage in a CRM. We will use Pipedrive as the example CRM. 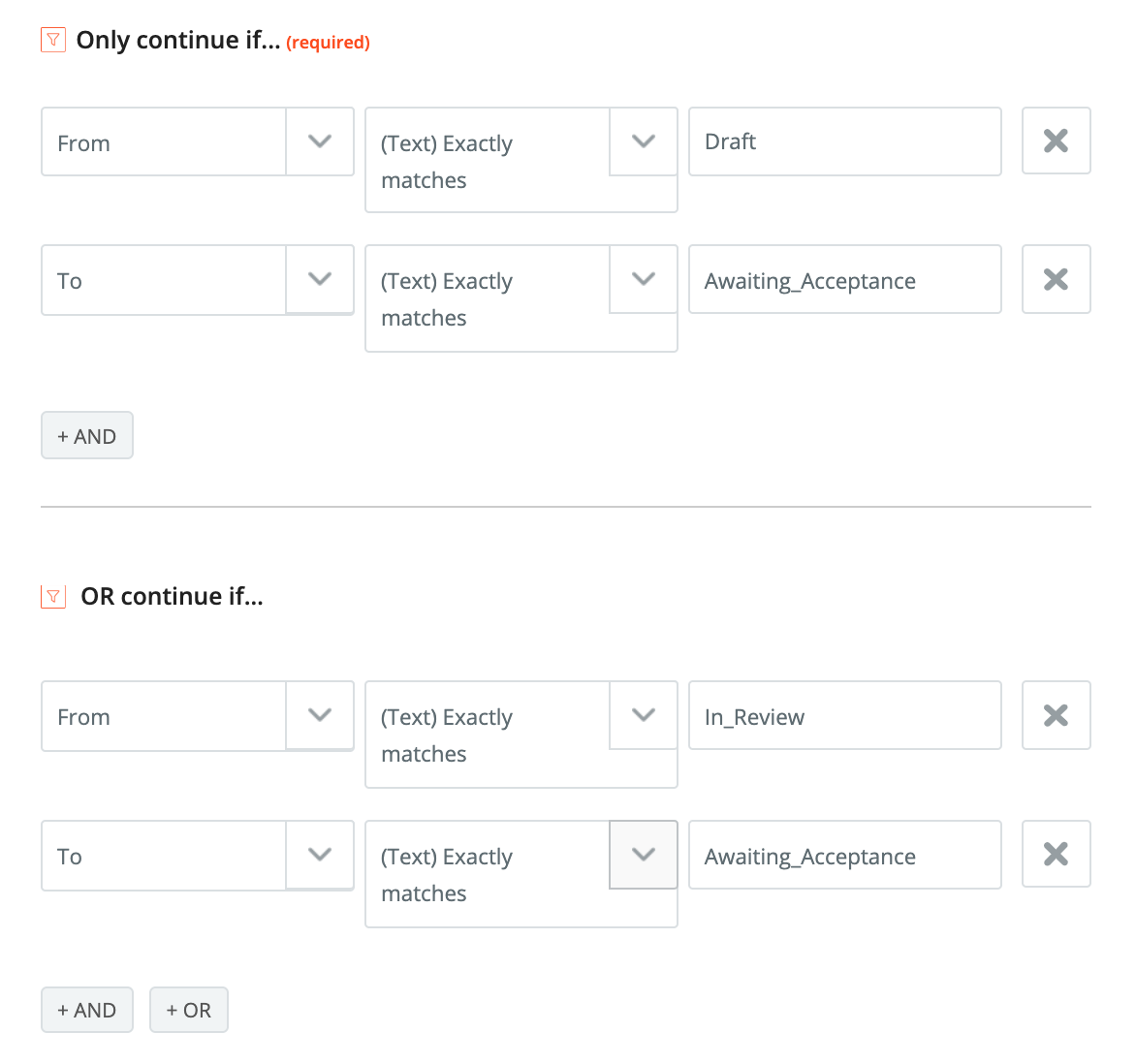 3. Action 2: Find Deal in Pipedrive - We will use the "Find Deal" search action, available once you select Pipedrive as your action app.

Once you've connected your Pipedrive account, you'll need to search for the deal by Title. Here's where you'll add the Proposal Name data field: 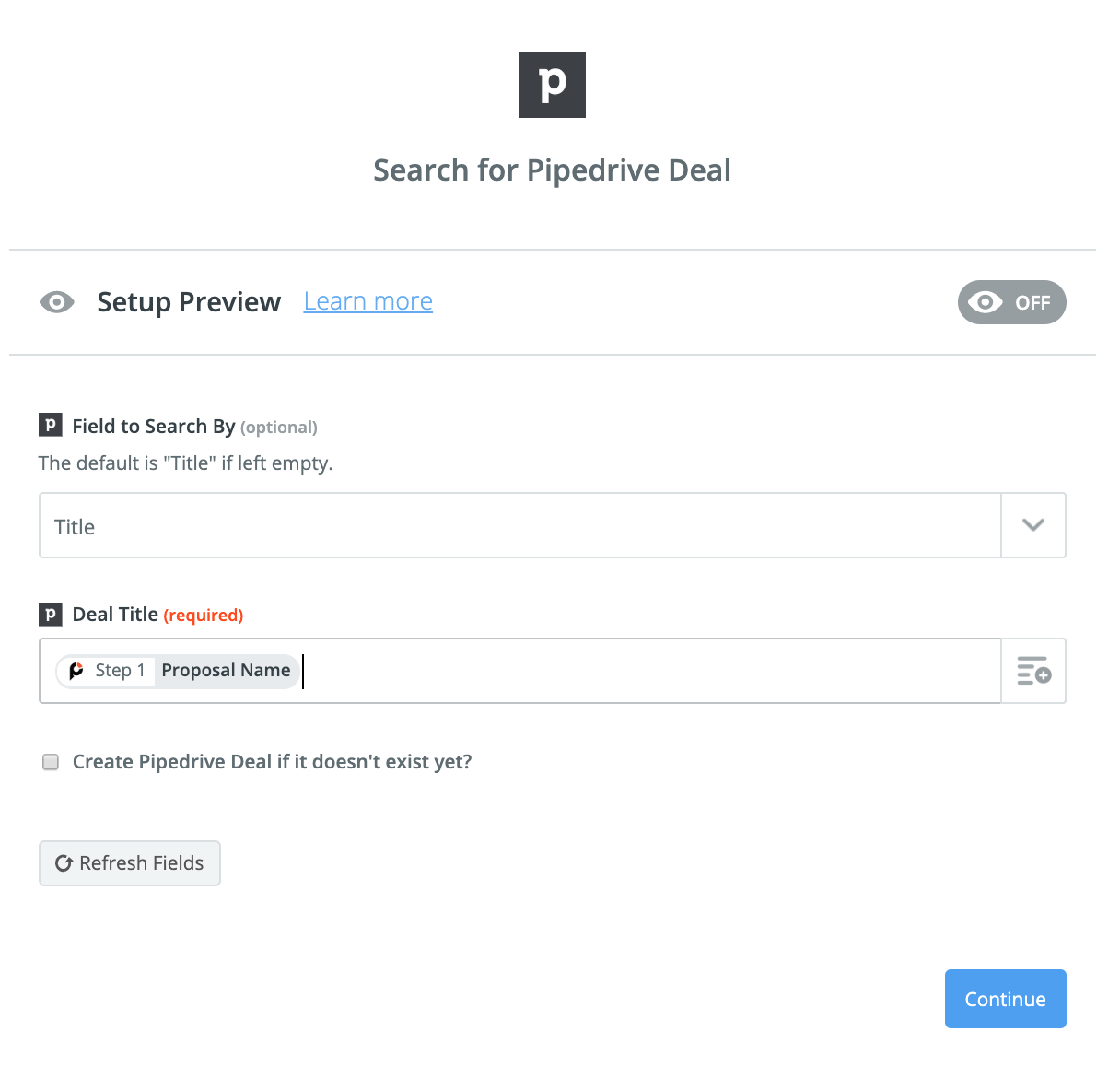 Provided your proposal name and deal name are identical, the search will be successful.

4. Action 4: Update Deal in Pipedrive - Select the Update Deal action under the less common options in the list of Pipedrive Actions.

At this point you are required to add the deal you want to update. We are going to use the deal we found in Action 3, so from the drop down menu, choose Use a Custom Value, which will allow you to select the Deal ID found in Action 3:

From here you can select to change the deal status (if you like), but most importantly, the stage of the pipeline you'd like the deal to move to:

Feel free to add additional optional information and once you are complete, switch your zap on. From now on any proposals sent via Practice Ignition will automatically move your deal to the Proposal sent Stage in Pipedrive!

There are countless automation possibilities with the Proposal State Changed Zapier trigger. For ideas and inspiration, check out the Practice Ignition Blog.